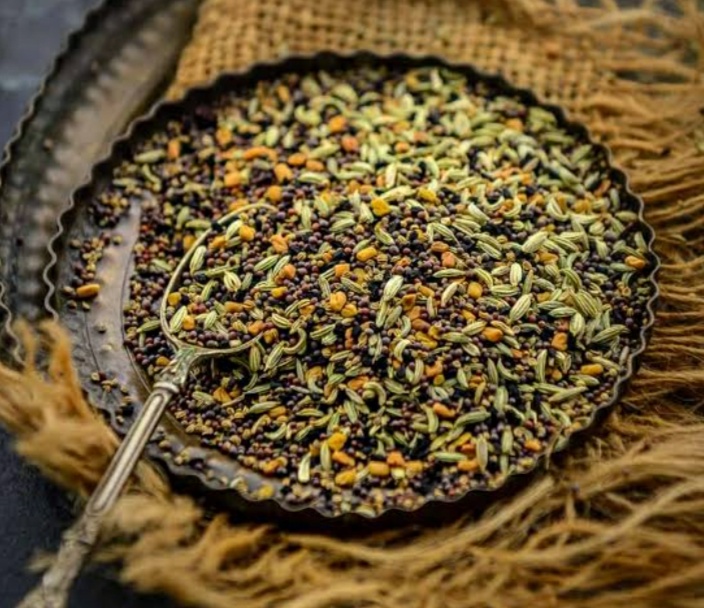 Panch Phooran is a blend Of Spices that is prominently known in the Eastern part of India in states such as West Bengal, Bihar, North East and Odisha. It is known to be an essential component used in the cuisine dishes of Bengal, Nepal and Mithila. The term “panch” refers to five and it combines five spices namely fenugreek (methi), fennel (moonji), cumin, black mustard(rai) and nigella(kalonji). Sometimes wild celery seeds or radhuni are used as a substitute for rai instead of black mustard seeds. These spices are used in the form of seeds and act as the main ingredients for preparation. The blend of spices looks very attractive and colorful and the seeds used are aromatic in nature Available in 100gm packet.

Panch Phooran are prepared through a process known as tempering (Phooran) in which oil is used to heat them releasing the aroma and this process is also known as takda in regional Hindi language. Bengali cuisine is sought to be usually incomplete without this spice blend and it is made without any form of grinding or roasting but rather mixing the combination of seeds in a specific ratio. The combination of spices is usually done in an equal proportion or same ratio so as to maintain the blend but in some Bengali dishes, the amount of fenugreek seeds used is usually less by half to remove the amount of bitterness in the mixture. After preparation, the spice blend is stored in an airtight jar so that the flavor and aroma remains for a long period of time. The seeds are taken in a preheated small pan on medium heat and ingredients are dry roasted with a small amount of oil The oil and spice mix helps to eject and spread the aroma around as an indication of readiness. Once ready, it needs to be cooled off to be later stored in a cool and dry place like a fridge.